The Pitcairn Islands Group comprises the volcanic islands of Pitcairn and Henderson, and the flat atolls of Ducie and Oeno. Pitcairn Island is the only inhabited island and is at latitude 25° 04’ South and longitude 130° 06’ West, about 2,170 km east-southeast of Tahiti. The islands’ administrative capital is in Auckland, New Zealand, 5310 km away. 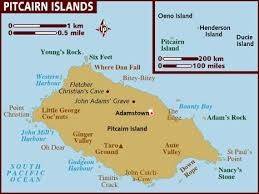 The islands were settled by the Polynesians for a number of centuries but they were no longer present when the group was discovered by Europeans. In 1606 a Portuguese sailor, Pedro Fernandes de Queiros, discovered the islands group although it is unclear which islands he actually landed on. Pitcairn Island was found by HMS Swallow in July 1767. In 1790 mutineers from the Bounty and some of their Tahitian companions settled on Pitcairn and burnt the ship there. Alcoholism, murder and disease reduced the numbers significantly. Contact was re-established after HMS Briton and HMS Tagus sent a party ashore in September 1817. The island became a British colony in 1838. By the mid 1850s the community was outgrowing the island and in 1856 the entire population of 193 people were transferred to Norfolk Island. However, subsequently, over forty returned to Pitcairn Island. After peaking at 233 in 1937, the population has declined, mainly as a result of emigration to New Zealand. Henderson, Oeno and Ducie were incorporated into the Pitcairn Islands Group in 1938.

Henderson was designated a World Heritage Site by UNESCO in 1998. Tourism in the main industry, together with subsistence agriculture, and handicrafts and honey are sold to visiting cruise ships.

Much of the information on biodiversity comes from the inter-disciplinary Sir Peter Scott Commemorative Expedition to Henderson Island, 1991-92.

According to the Kew online herbarium database (quoting the PhD thesis of Kingston, 2001) there are 367 plant species, with 147 native to these islands and neighbouring French Polynesia and a further 19 endemic to the Pitcairn Island Group. There is a high level of endemism amongst the insect fauna on Henderson Island and half the molluscan species are thought to be endemic, at least to sub-species level. Fish endemicity is regarded as low. There are no native species of reptile, amphibian or mammal.

Henderson Island is regarded as being of great ornithological importance. All four land birds there (Henderson Crake Porzana atra, Henderson Fruit-Dove Ptilinopus insularis, Henderson Lorikeet Vini stepheni, and Henderson Reed-warbler Acrocephalus taiti) are endemic and there is one endemic bird species, Pitcairn Reed-warbler (Acrocephalus vaughani), on Pitcairn Island. Most, if not all of the world population of Henderson’s Petrels (Pterodroma atrata) and over 90% of the world population of Murphy’s Petrel (Pterodroma ultima) nest in the Group.

Native pandanus trees Pandanus tectorius on Pitcairn IslandOver 350 species of fish have been recorded around Pitcairn, with several inshore fish known only from Pitcairn Islands. The deep sea around Pitcairn contains approximately 400 sea-mounts which provide important habitat for many deep-sea fish and invertebrates. 22 species of cetaceans are found, including blue whale, sei whale, fin whales and humpback whales. A Marine Protected Areas was designated in 2016, at 834,000 km2 this is one of the largest fully protected marine reserves in the world.

Pitcairn has an Environment Charter signed jointly with the UK Government. Guiding Principle 7 is to safeguard and restore native species, habitats and landscape features, and control or eradicate invasive species. Under the associated commitment 2 the government of the Pitcairn Islands will ensure the protection and restoration of key habitats, species and landscape features through legislation and appropriate management structures and mechanisms, including a protected area policy, and attempt the control and eradication of invasive species. Implementation progress was reviewed in 2007, 2010 and 2016, read the 2016 review report (external link).

New biosecurity legislation was being drafted in 2019/2020.

A total of 235 non-native species (marine and terrestrial) was recorded for Pitcairn by the RSPB Stocktake (Churchyard et al 2014).

Pacific rats (Rattus exulans) are regarded as a major threat, particularly to breeding birds although they may also be implicated in the extinction of some land snail species. In 1997 rats were eradicated from Ducie and Oeno. Introduced invasive plant species such as Rose-apple (Syzgium jambos), Lantana camara and Passisflora maliformis are posing a threat to endemic plant species some of which have a limited range and low numbers. Rose-apple in particular dominates the upper slopes of Pitcairn Island, but provides a long-season of nectar for the islands’ beekeepers.

Although rats were eradicated from Ducie and Oeno in the 1990s there is a continuing threat of reintroduction from Pitcairn Island where two eradication attempts have failed.

Eradication of rats on Henderson Island was attempted in 2011 (the largest tropical or sub-tropical island ever to be subject to a rat eradication operation), but unfortunately a weather change thwarted complete eradication.

The Mediterranean fruit fly (Ceratitis capitata) a pest of Citrus and is subject to management through the annual issue of insect pheromone traps by the Conservation Officer. The aim is to reduce the number of male fruit flies available for breeding.

In 2017 a biosecurity gap analysis (PDF) was completed. The Biosecurity Department consists of a Director of Biosecurity and a Biosecurity Officer. The Biosecurity operations for Pitcairn Islands was established in 2006 with the assistance of SPC. The system was reviewed in 2013 by the Secretariat of the Pacific Community. There are dedicated biosecurity facilities and limited functions are carried out at that location; they require upgrading to allow full use, and equipment is still lacking. There is a zoosanitary declaration form in place, used for the Pitcairn Honey industry products. Pitcairn honey is tested on an annual basis in New Zealand by a reputable organisation for certification into the UK and EU. All honey producers are aware of zoosanitary declaration forms the Bio Security department provides printed declarations when required. There are posters and signs for raising biosecurity awareness. A Biosecurity Manual was drafted in 2019. A review of procedures and training in biosecurity delivered by a consultant under an RSPB-led Darwin Plus project in 2019.

A pathway analysis was done in 2006 to assess the risk of new trading arrangements with French Polynesia to import fresh produce (Jones et al 2006).

In 2018 a second pathway analysis (PDF) was completed. Pathways of introduction are few. There is no airport in Pitcairn and access is entirely by sea. The island is served by a dedicated passenger / cargo vessel, the MV Silver Supporter, which sails regularly between the nearest airport in Mangareva in French Polynesia and Pitcairn for passengers and to deliver cargo, plus periodic voyages to New Zealand for cargo. A number of cruise ships visit each year.

Horizon scanning was carried out in 2019, identifying a total of 32 new invasive species of concern which have the potential to arrive within the next 5 – 10 years; read further details.

Drawing on commitments made under the Environment Charter, Overseas Territories Environment Programme (OTEP) two OTEP funded projects (external link) were delivered in total between 2004 and 2012.

The project ‘Tackling invasive non-native species in the UK Overseas Territories’ was implemented between 2016 and 2020 to strengthen biosecurity in the OTs, funded by the UK government Foreign and Commonwealth Office’s Conflict, Stability and Security Fund (CSSF). Pitcairn benefitted from a number of activities to strengthen its biosecurity, including: pathway analysis, horizon scanning, pathway action planning, legislative support for drafting biosecurity legislation, access to online learning, and technical support. Read further details (external link).

The Blue Belt Programme seeks to enhance long-term sustainable marine protection strategies for the UKOTs, and provides £20 million of funding over 4 years (2016 to 2020), also funded by CSSF and delivered by the Centre for Environment, Fisheries and Aquaculture Science (Cefas). The Programme assisted the Pitcairn Islands Government in drafting of new Marine Conservation Regulations, together with the development of an MPA management plan, and training on MPA management planning. Reports and further information can be found here.

An EU-funded project, “PROTEGE”, began in 2019 with an invasive species management component, led by the Secretariat of the Pacific Regional Environment Programme (SPREP). PROTEGE is an integrated project aiming to reduce the vulnerability of human and natural systems to the impacts of climate change by increasing adaptation capacity and resilience. It also aims to improve management, conservation and sustainable resource use of biological diversity and water resources. It is funded by the 11th European Development Fund (EDF) for the territories of French Polynesia, New Caledonia, Wallis-and-Futuna and Pitcairn for a 4 years period. The overall objective is to build a sustainable development and resilient economy for the Overseas Countries and Territories (OCT) to face climate change by improving biodiversity and naturally renewable resources. Outcome 4 concerns invasive species: Alien Invasive Species are managed to reinforce the protection, resilience and restoration of ecosystem services and terrestrial biodiversity. The project includes the development of an invasive species strategy and invasive species management plans.

Before travelling please ensure all items are clean, free from organic materials such as mud, faeces, seeds and invertebrates: